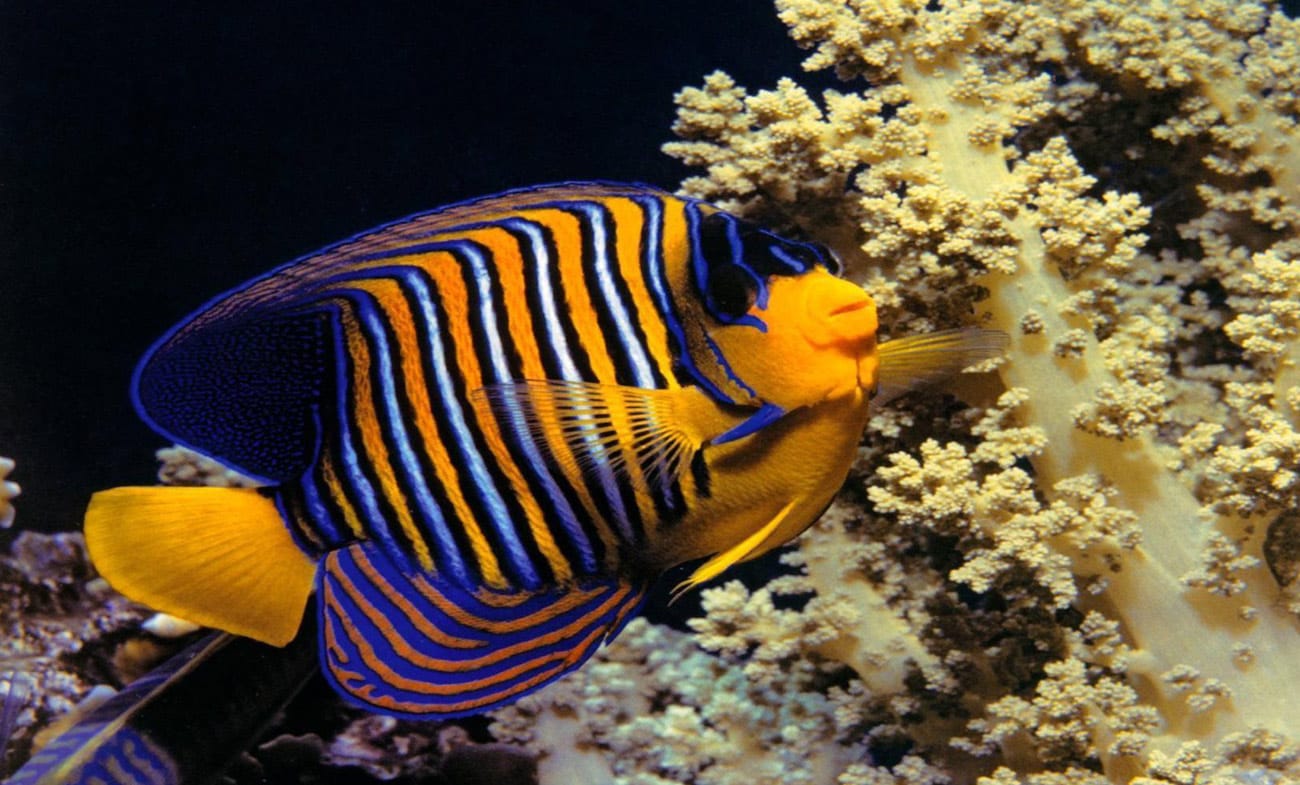 Angelfish have the spine on the lower corner of the gill cover OK it’s not the most blatant of differences, but its there.

Butterflyfish tend to have a limited colouring pattern – white, black, yellow and orange. Angelfish on the other hand sport an array of colours so if you see some blue, green and/or most other colours then it’s more likely to be an angelfish.

Their mouths are different too: all butterfly fish have a very small mouth just a few millimetres wide, they pout for want of a better description! Angelfish on the other hand have a relatively wide mouth, designed to munch on mouthfuls of sponges, algae, jellyfish and soft corals. Because of this difference in mouth shape, angels have a relatively wide “face” when viewed head on whereas butterfly fish are thin-faced. Another difference is that angelfish tend to be found alone or in pairs whereas butterflyfish are in larger groups.

Marine angelfish are of the family Pomacanthidae, they are found on shallow reefs in the tropical Atlantic, Indian, and mostly western Pacific oceans – here in the Red Sea 9 different fish can be found. There are 87 species in 7 different genera; Genicanthus, Centropyge, Pomacanthus, Pygoplites, Apolemichthys, Chaetodontoplus and Holacanthus. Pomacanthus (specifically Pomacanthus arcuatus – the grey angelfish) can reach up to 60cm and some can emit ‘knocking’ sounds whilst Centropyge are known as pygmy angels growing up to 10cm.

The larger species have juveniles have a completely different colour pattern – check the picture below for the difference between the juvenile Emperor and the adult. Genicanthus has different coloured sexes too.

Juveniles tend to be fairly shy creatures, preferring to hang around in reefs so they can dive in to crevices in case of threat. However, they are very territorial especially when fighting members of their own species and also towards closely related species.

All species have the ability to switch sex from female to male, first the internal reproductive organs change and then the body colouration changes. This is called protogynous hermaphroditism Makes sense to change sex that way around as opposed to a penis just dropping off – although this can occur in nature too.

Males defend a territory typically containing 2-8 females; they have a harem, essentially. Their territory can range massively depending on their genus; Centropyge have from a few square metres whilst Promacanthus can rove thousands of square metres. Reproduction is seasonal from April until November and after the “activities” hatching occurs within 24hours with the larval stage lasting 3 – 4 weeks.