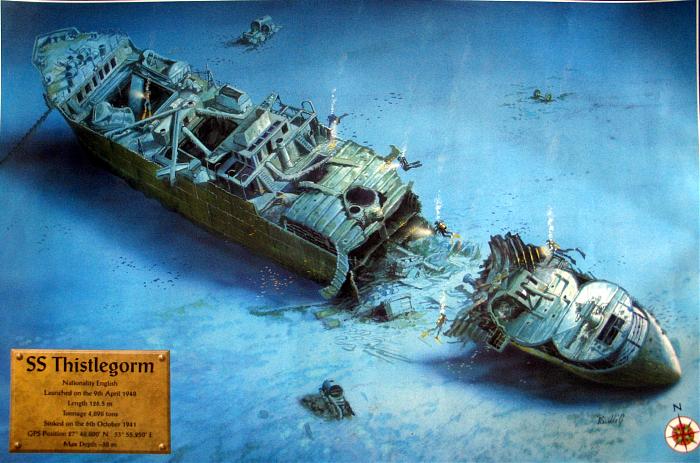 Even though the wreck of the SS Thistlegorm lies closer to Sharm el Shiekh than Dahab, it’s cheaper to do the trip through us than from most dive centres in Sharm. Go figure.

The SS Thistlegorm is a British ship built in 1940. In her short life she carried out three successful voyages before being sunk on her fourth on 6th October 1941 near Ras Mohamed off the coast of Sharm el Sheikh en route from Glasgow, UK. Her cargo on her fourth and final voyage consisted of mainly vehicles, weapons, Wellington boots and two steam locomotives most of which still can be seen on or around the wreck today. She was carrying this for the Second World War effort up to Alexandria, Egypt. Jacques Cousteau discovered the wreck in the 1950’s and it was largely forgotten about until the 1990’s where it became one of the top 10 wreck dives in the world.

This trip runs every few days from Dahab so there’s a really good chance you’ll be able to get on one. We want you to be a PADI Advanced Open Water dive or equivalent as the wreck lies at 30m and the shallowest point is at around 18m. There’s a possibility of strong currents so hence the need for competency too.

We set off at… ahem… 3am to get to the port at Sharm el Sheikh. Find a comfortable spot on deck for some shut-eye before setting sail for the wreck. Once you’re there, after breakfast and a hot coffee, you’ll kit-up and giant-stride your way towards the bottom of the Red Sea where she lies. The first dive is around the wreck, taking a stop at the propeller before surfacing. A surface interval later, and you begin your second dive which allows for wreck-penetration. Due to the way in which the Thistlegorm was bombed a lot of the areas are open and therefore accessible to divers without being a scary dark wreck. Next there’s time for a siesta and lunch provided on the boat, you’ll sail towards Ras Mohamed National Park for your third dive on Shark & Yolanda reef. This shallow dive is magnificent, drifting along the reef wall that drops off to 800m. Around the outer edge of Yolanda, there’s a gorgeous soft coral garden with many golden Anthias to boot. Chances to see sharks here in the summer is an obvious pulling point too. Giant Morays, Barracudas and Trevallys are pretty much the norm here.

Once back on dry land, you’ll have a chance to see the sights of Sharm el Sheikh for a couple of hours, off-gassing before going up the mountain pass back to Dahab. You’re expected back in Dahab at around 1900 hours with plenty of time for dinner.