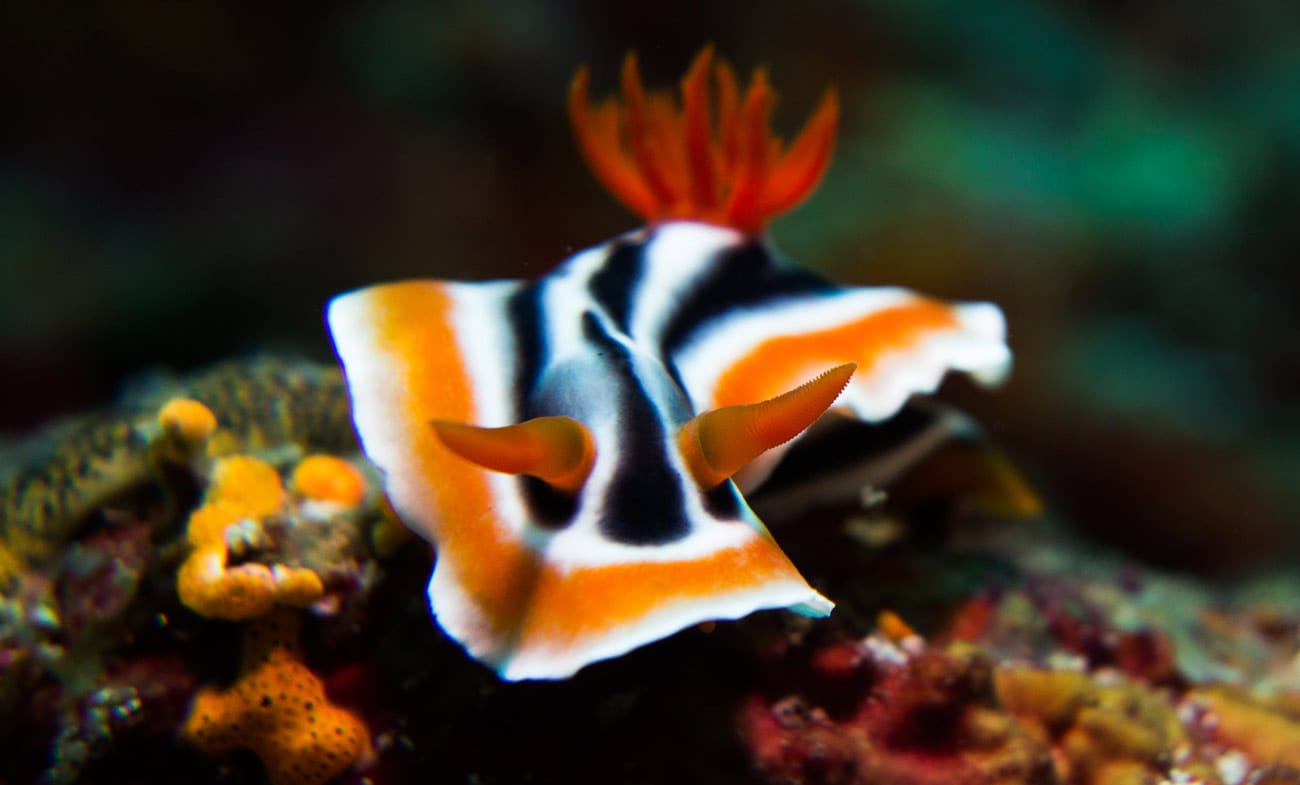 Naked as the day they were born…

But it makes a good title! Nudibranchs start off with shells when they are born and then shed them when they grow up. Not to worry, they have other defence mechanisms which kick in. Most species of nudibranchs have their gills on top of their dorsal surface. Some species have gills on their butt and these are used for breathing. Some however, have finger-like throngs on their backs called cerata which are used for breathing and also, defence.

As nudibranchs don’t have any shells, they use different types of defence such as stingers, poisons and their colouring. Either they have subtle colours, thus camouflaging themselves, or the opposite – they have vivid colours to warn predators of their dangers. Interestingly, some eat toxic sponges and store the toxins and then excrete them when they’re in danger, passing the toxin on to their predator.

Equally they can also ingest stinging cells from anemones, fire coral and hydroids and store the stinger in their cerata for when they need it. I find that fascinating. Some nudi’s have produced their own poison naturally and use this as a defence method. Regardless of their protective mechanisms they still are subject to predators; some fish, turtles, crabs and even people have been known to eat them. I can’t imagine you get much bang for your buck by eating them, but as they say “there’s nowt queerer than folk” As far as scientists know, nudibranchs are carnivores and they feed on, amongst other things corals, bryozoans, hydroids, sponges, tunicates, anemones and other nudibranches. Mostly, each species of nudi generally only likes to eat one type of prey.

The word Nudibranch derives from the Latin “nudus” for naked and the Greek “brankhia” meaning gills; explaining why the word should be pronounced nudi-brank as opposed to phonetically. Nudi’s can live all over the world’s oceans: from tropical to colder waters, at both shallow and at depths of 700m (over double the depth of our Guinness World Record holder Ahmed Gabr!) and indeed a new species was found at 2500m.

They are benthic creatures, meaning they are normally found on the sea floor. They are found slithering over seagrass, sand, corals and other substrates. As usual, there are exceptions to the rule such as the Cephalopyge trematoides and the Glaucus marginatus which are Pelagic nudibranchs meaning they swim out in the open ocean. These nudibranchs feed on flies and Portuguese man-of-war. Some species can grow up to around 45cm and you may have seen them on your travels: the Spanish Dancer (Hexabranchus sanguineus).

Whereas the smallest nudibranches scientists have found are microscopic, moving around grains of sand. For the most part though, nudi’s are around 10cm long. Their lifespan seems to be around 18months, with their numbers increasing or decreasing depending on food source and living conditions.

Reproduction-wise, they are hermaphroditic which means they have both male and female bits. However, it is rare that they can fertilise themselves but obviously reproduction is fairly simple on the basis that they can mate with any other nudibranch of their species – as long as they assign a male/female role before they get down to business!

Many divers swim right past these gastropod molluscs or simply put, marine snails. They’re hard to spot due to their size and normally beginner divers find them fairly unimpressive as they’re arguably not as notable as sharks, say. If you are lucky enough to spot one, as with anything we find underwater – please don’t touch them. They are incredibly fragile and you can harm or even kill them. Be careful with your fins too as I’ve seen nudi’s go up in a draft from the propulsion of people’s fins.

We have many different species of Nudibranch here in Dahab, take a look at our social media for some pictures of them spotted around here.