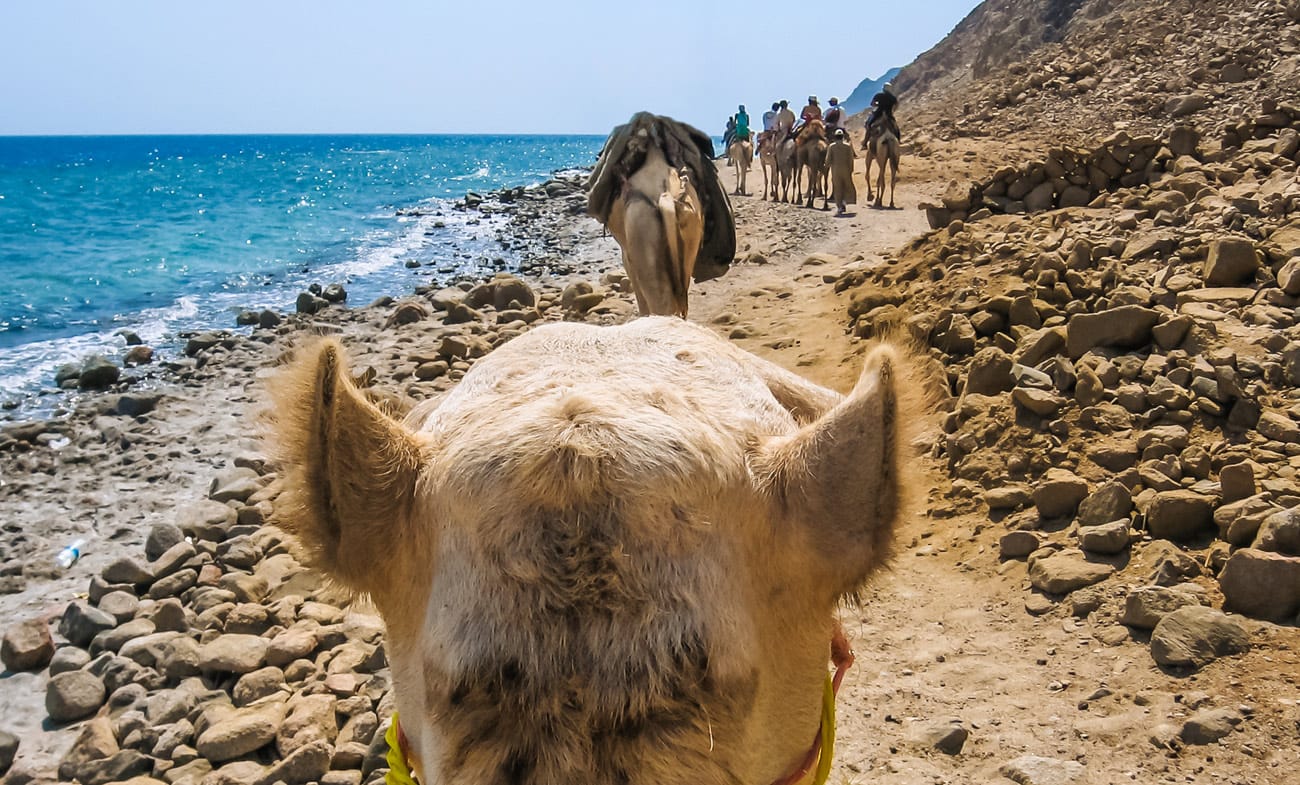 R.A.G. (.. aka Ras Abu Gallum trips) you’re taken back decades in time. Ras Abu Gallum is north of Dahab’s famous Blue Hole diving site and is a gem of a place to visit.

I almost don’t want to tell you about this, there are only a handful of Dahab’s divers that go on this trip per year hence why these reefs are still so pristine. You’re almost guaranteed turtles and less so, Eagle and Manta rays hang around there too.

It’s possible to make this a day trip and you can even do the trip by boat. But if you really want to get the whole feel for it, it’s better to opt for the overnight Ras Abu Gallum experience. Here’s a trip report from one of our divers and friends, Jen:

We went to this tiny little Bedouin place by the name of Ras Abu Gallum. It is tiny, two families live there, a population of about 20, give or take a few stragglers. To get there you either go by truck up to Nuweiba and back down again, which takes 4 hours, or you camel it from the Blue Hole for an hour. Of course, we opted for the camels! H2O Divers are only one of a few who offer a diving trip to Ras. I’m so pleased it did it. I’m probably only one of 50 divers who got to experience it this year.

The journey itself is a total experience worth doing. We arrived at the dive centre for 7am, and by 7.45 all of our kits were loaded up, tanks and all onto these odd creatures. I’ve never been a camel fan as a rule; they smell, they feel uncomfortable and all you want to do is hurry them up. This might be because when travelling on four legs I’m too used to being on a horse. Getting onto them itself is entertaining; it’s like watching someone climb onto an extra large clothes horse in the way their legs concertina and fold underneath their bodies. The amazing thing was that once you were on board, they were away! No leading, no direction… they knew exactly where they were heading. A very odd experience, but within ten minutes I was absolutely loving the laid back style. I just chilled and started to look around. My opinion was very much changed.

The seafront path you ride along is ridiculously rocky, but so very totally stunning. It’s like walking back into the Jurassic period. The cliff side and rock faces are so old you can just tell that so much history must have taken place along the trail. Frankie, our guide explained that the trail was actually originally used by the Romans, and they regularly used it to transport goods. You could just picture the Legion pacing down the sands, heading up to cross into Arabia. It really was quite breathtaking. As you carry on around the rocky path you can suddenly see these little dark dots in the distance, these dots turned out to be the wooden huts of Ras Abu Gallum. It works out to about 5 miles north of the Blue Hole. The sun is just beginning to pick up heat as you close into the destination. I was quite sad when I got there as I was quite happy just to carry on taking in the coastline. However, that was just the beginning.

We chose our “hut”. Which literally consisted of shoots tied together in the sand but it keeps you out of the direct sunlight. We offloaded the camels and the Bedouin Sheikh (Sheikh means leader, this man was the leader of his village) greeted us and brought us fresh Bedouin tea which was deliciously refreshing after our trek. We met the local cat, a well looked after grey who was very cuddly and friendly. Also the local dog that was the happiest dog in Egypt! You could almost see her smiling.

Frankie showed us around, not that there was exactly much to show. We were situated on the beach with stunning views all around. A functioning toilet was about 50 meters away (Don’t expect luxury though… it’s a traditional toilet – think hole in the ground) there were mattresses for us to chill out on. Blankets in case we get cold over-night.. and stunning reef diving wherever we went! By 10am we were wading into the water for our first dive. My buddy was half way through his Deep spec, meaning he was learning the science of diving down to 40m and gaining his qualification. It was quite simply stunning. The corals were alive with colour and there were shoals of all forms of fish no matter where we looked. The first dive lasted 45 mins and we came out feeling so refreshed. I always thought that Dahab had the most stunning reefs of Egypt, but Boy, did I not know! This was something quite special.

We changed our kits over and settled down to chill in the sunshine and await lunch. Frankie explained that the Sheikh’s family would be cooking for us. We had fresh battered Grouper (caught about an hour beforehand) with rice and fresh salad. I’ve never tasted fish like it. But to fair, I don’t think I’ve ever had such fresh fish before. We let that settle for an hour then kitted up to head up to the Rocks.

The Rocks is a drift dive on the far edge of Ras Abu Gollum. I’d been told about this dive beforehand. It’s known as Triggerfish Alley as it’s a nursery ground for the Red Tooth triggerfish. You sit at about 20m and just let the current take you. I’ve never seen anything like this dive before. The colours and the beauty is just beyond compare. No matter where I looked, I was surrounded by thousands of these stunning bluey/greeny triggerfish. It really could not be described. This went on for a good hundred meters, and just when you think it ended, another shoal would appear. The masses of colours from all the groups and goatfish was just… well, wow. I came out of that dive in another world. I couldn’t wait to get back into that water to experience more. The last coral rock before we excited was covered in Lion fish too, which as you know are a regular in the Red Sea, however I counted 17 on this tiny rock! A gorgeous big-eyed puffer sat in the middle of them staring out at us.

That was it for the first day. We chilled out in the sun, drank the beers that we’d brought with us and took it all in. We had roasted chicken for dinner, with pasta and more fresh salad, which again was delightful. Chatted away as the sun went down and the stars started to appear over the mountain. Now, living in the UK I live in quite a populated area, so I’ve never particularly seen the sky at night in a way which makes you stop and think. Up at Ras, with no light pollution once again rendered me speechless. We camped out underneath the stars and for the first time in my life I saw not just one, but three shooting stars! We slept soundly on our mattress and enjoyed the sounds of the waves against the beach.

We woke up at 6.15 just as the sky was beginning to lighten but there was no sign of the sun just yet. We’d all decided to do an early dive, 7am in the water before breakfast. We went up to a sit between the house reef and rocks but had no specific name. The one thing that made it stand out though was the amount of pinnacles sticking up throughout the corals. Very striking and different to the other sides only a few hundred meters away. My buddy needed to finish off his deep spec so we planned to go down to 38 metres. The sun had just risen above the water as we went down and getting to 30m was quite a view. Where the sun wasn’t high in the sky it looked like we were almost diving into the abyss. The night sky was still reflecting downwards. A very eerie feeling at the back of my spine as I watched the colours change in front of me. A pretty dive, not as so many fish in this area as Rocks, but the colours and the pinnacles still made it stand out.

We got out of the water just before 0800 and once again set up our kits. Breakfast and tea were served, basic breads and jam but delicious all the same. We let our surface interval time climb as the sun came up and once again, we chilled. (As you can tell we did a LOT of that… but, in such a serene place it’s hard not to do anything else. You don’t want music blaring.. or loud chatter. It’s just you and a little piece of paradise)

The last dive we chose to go back and do Rocks again. The current wasn’t as strong the second time so we had a longer time to reach the exit point. It was a similar experience to the day before but nonetheless anything but beautiful. Knowing it was our last dive we took the camera and got a few shots, as you can see the results are on here! I don’t think I’ll ever be able to do the beauty justice. My friends who dived here with Frank back in June managed to catch site of a Manta. Unfortunately we didn’t, but our experience was just as amazing.

After the dive we packed up our kits and sat down for lunch. Today it was fresh Goatfish. I found it so weird as you could still see their little feelers under their gills. It was just as good as the Grouper on the previous day, if not better. The Bedioun family couldn’t do enough to look after us. Such a friendly bunch too, they have a couple of little children that come round and say hi every so often. Always smiling, always happy despite having no electricity, no internet, no computer games! They play in the sand every day with strong imaginations. Simplistic, but heavenly.

Our camels arrived earlier than expected, but the sun was still high in the sky so we did not want to move too quickly, otherwise it would be sunburn ahoy! Curled up on the beach for a while and took in our last views before getting onto our walking clothes horses for the journey home.

All I can say is that it was worth every penny. I visited somewhere which only the rare very lucky tourist gets to see. You can keep your Pyramids and museums tours, sandboarding and quad biking…. Give me the peace, tranquillity and absolute beauty of Ras Abu Gallum any day. It’s magical. If I get a chance, I’ll be heading back there again.

So if this sounds like your cup of tea let’s get going! Trips run as soon as we have enough people. You can always email to book your spot and we’ll do our darnedest to make it happen for you.

We can also take a boat up here and do a day trip; there are some great technical diving spots up here too.